What a wicked time in the Austrian Alps.
Thanks Affine Records for your great support!

On our return to Copenhagen we combine forces with the mighty viking drummer power MR KALLE from Kalles world tour.

Come out Copenhagen cause we know you like to dance and we like to watch you dance!

After returning to South Africa, Gazelle performed at the Red Bull Soundclash, a two-stage contest between them and Die Heuwels Fantasties who, dictated to by a DJ, had to perform various musical tasks and win the approval of the crowd - as measured by the volume of their cheers and screams. “It was an awesome show, a really nice vibe,” says Ferreira. “Not just the people organising it and at the show, but the vibe between the bands. Us and Heuwels really got nice and tight and it was a fun experience to make music together. Plus, it was great to come back from overseas and see how things are moving in South Africa. There is much more appreciation in South Africa than a few years ago - people are actually fans of bands, and the production quality is high and there are more and more promoters and bands, young people who are just getting out there and making the music and the scene.”

Extract from an article by Evan Milton

Check out these links for more info:

“There is more to Africa than Civil War and Safari..”

Gazelle featured on the pages of COLORS Magazine.. 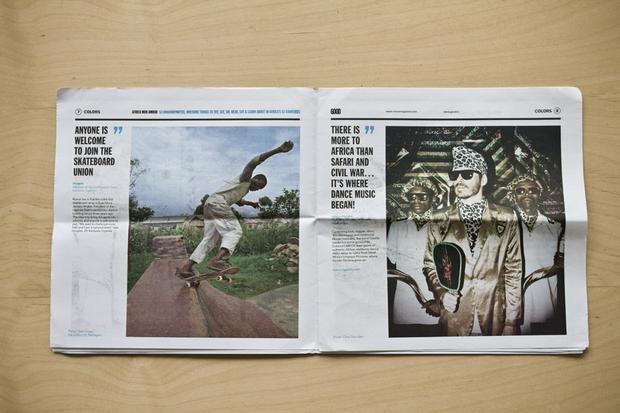 It is with honor that we are proud to announce Gazelle’s participation in the Smirnoff Global Nightlife Exchange project. As part of the artists representing South Africa we will be performing in Berlin on the 27th November 2010.

FROM RUSSIA WITH LOVE*

Reporting from behind the Iron curtian….
or what we now call the velvet rope…
Our secret agent man informing the ex red nation…
Gazelle in Russian….yes you heard me the Imperial House of Africa representing on an official
visit to the eastern worlds…

Thats if you read Russian of course

Gazelle has announced that they will return to South Africa from New York during November to do a 4 week nationwide tour.
look out for dates!!

EXTRA EXTRA READ ALL ABOUT IT!!!!!

Featured in the new NYLON magazine is an article on Gazelle
and a photoshoot that was done with them during their tour in Paris.
So grab one…
We take our first steps into infiltrating the American media

GAZELLE IN LeMonde ITS THE FRENCH TIMES

Gazelle in Le Monde during the official state visit to France..

They say they love the it..
Its funky and most essentially its sexy.
Sounds like its perfect for Paris.
And thank god there is no VUVUZELAS in the background on the Horizon..

Gazelle is in Paris on the official state visit to France..

Tonight we kick off with a show at
Nouveau Casino

We happy to say we feel welcome seeing our srticle in TRAX MAGAZINE on arrival..

Gazelle in the House of VOGUE !!!

WE are happy to announce that we have infiltrated the House of VOGUE…
and W magazine…..madasucka…!!!

The Imperial House of Africa prevails

read it on STyle.com

On the preperation for Wednesday’s Launch of our first clothing collection.

UBUNTU in collaboration with the Inoue Brothers

The launch will be held at TS underground Copenhagen for a close group of friends and media.
With a special little performance from Gazelle and the premiere of our short film for the collection.

The collection will be available at

So finally we say….
BIG IN JAPAN!!

This is the article that had been published by one of the most respected fashion, music and culture magazines in Japan, Quotation Magazine.

Cant read Japanese yet but my advisors tell me that it they are being good ambassadors.

Soon we come for our official state visit to Japan… 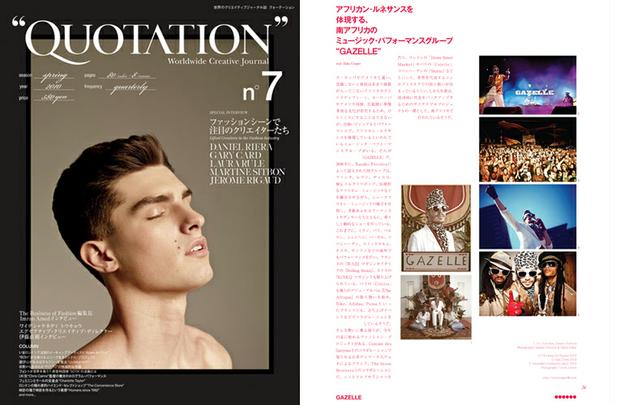 WE are very pleased to present to you Ladies and Gentleman….
Madam Speaker..

And introduce to you our star Presenter Radio Celebrity Personality HAPPY!!!!!
He’s the newest member to the family at The Imperial House of Africa

“Halooo..
My Name is Happy…
And I do the Happy show…
They called me Happy because when I was born I looked Happy…
So I decide to make my own radio show..
THE HAPPY SHOW…”

Here is the hit video for the day…

Is it a pirate off the coast of somalia

Is it a Pirate off the coast of Somalia…

or is it us that has lost some albums on the way..

We got the black market business going..

I got this meessage today to the Imperial house of Africa..

“Hey there, hope this is not a backhanded compliment, but I bought “Chic Afrique” at Cash Converters today for R10, factory sealed…so if any of your stock fell off the back of a truck in the Moot, Pretoria area, check out the Cash Converters in Queenswood, they had about 10 copies. Great album by the way!”

I hope you njoy madasuckas….
hehehe

And for us all

We are proud to announce…
after our meeting with the producers of Ableton and Native Instruments that they have joined forces with the Gazelle Movement.

Receiving their support and endorsement we move forward at a steady march.
Its like an arms deal where we get the weapon of choice to fight our good fight.

Together, Forever and for us all…
We strategize to conquer the hearts and minds of many

Its been quite a ride arriving in the German capitol…
After our official state visit weve been hangin with the boys from Renaissance Man bumped into old friend Hugo Capablanca and revisited our agent Jackmode….
Its been quite a ride…
Berlin we love you but you making me tired….hehehe…

So weve been joining forces with the Cape Cide Team…
A new exciting cider from Bitburger to hit the German Market..
So far weve made some people dance in Munster and Dortmund…
and Next week Cologne….
Checkit how we wreckit..
Some official state visits from the Imperial House of Afrika…
x

The Road to LIMPOPO

We are off to cross the country after performing at the RED BULL STREETBALL WORLDCHAMPS……
On the road to LIMPOPO…..to create…
record in the bush next to the fire and call upon our ancestors to guide us with the next steps…
x

Gazelle was amongst a star lineup with Lonelady and Uffie to rock the crowd…
It was with honour that we infiltrated the french media to appear on different teleevision networks
spreading our message.